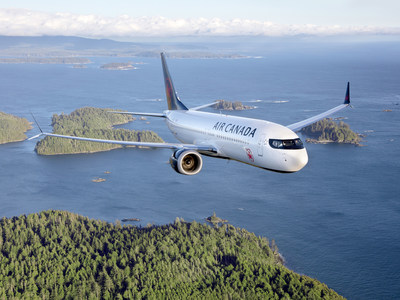 Through its Leave Less Travel Program, Air Canada is sourcing its SAF from Neste, a leading producer of renewable fuels, which will provide the airline with Neste MY Sustainable Aviation FuelTM. (CNW Group/Air Canada)

Through its Leave Less Travel Program, Air Canada is sourcing its SAF from Neste, a leading producer of renewable fuels, which will provide the airline with Neste MY Sustainable Aviation FuelTM. Powering aircraft with SAF directly reduces greenhouse gas emissions (GHG) at the source. These four flights will allow Air Canada to reduce emissions by approximately 39 tonnes of CO2e, compared with the combustion of conventional fossil jet fuel. This represents the equivalent of two rounds trips between Ottawa and Vancouver, or roughly 19,000 km, by car.

"Today we reaffirm our strong, ongoing commitment to sustainable aviation and reaching net-zero GHG emissions by 2050. Air Canada has been involved in the advancement and development of sustainable aviation fuel for a decade and we are proud to continue to lead the way in Canada when it comes to aviation climate action," said Teresa Ehman, Senior Director, Environmental Affairs at Air Canada. "SAF is the main avenue by which Air Canada and the aviation industry as a whole will reduce their GHG emissions, as the industry continues to develop other aircraft technologies such as electric, hybrid or hydrogen aircraft at scale in a commercially meaningful way.

"The road to decarbonizing aviation requires a collective effort and is why Air Canada actively works with government, producers, and aviation stakeholders to accelerate and develop a commercial production of SAF in Canada. Because SAF will play an important role in decarbonizing the industry, we welcome corporate Canada to join our Leave Less Travel Program to increase the market demand for SAF in Canada as well as to reduce the environmental impacts of their business travel."

With Air Canada's Leave Less Travel Program, corporate customers can purchase SAF, carbon offsets or a combination of both to offset or reduce GHG emissions related to business travel and reduce their carbon footprint. This program is one of the many comprehensive initiatives being implemented as part of Air Canada's Climate Action Plan and an additional step towards achieving the airline's long-term goal of net-zero GHG emissions by 2050.

As part of its Climate Action Plan, Air Canada committed to invest $50 million in SAF and carbon reduction and removal technologies. According to IATA, SAF has the potential to provide a lifecycle GHG emissions reduction of up to 80% compared to conventional jet fuel.