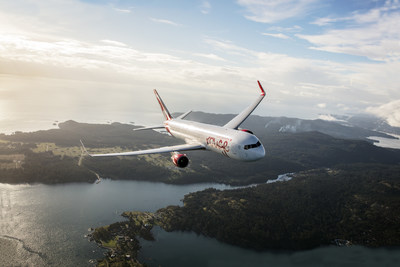 "Customers now can access Rouge Wi-Fi high-speed internet connectivity on their own devices whenever they are onboard an Air Canada Rouge aircraft anywhere in the world, giving everyone the ability to stay connected to email, surf the web, or stream their favourite movies and TV shows from services like Netflix and YouTube. We are excited to now offer fast, reliable wi-fi options onboard all Rouge aircraft for the increasing numbers of customers seeking connectivity when flying," said Andrew Yiu, Vice President, Product at Air Canada.

Customers can choose from a selection of Wi-Fi packages to suit their requirements with starting prices of $8.50 CAD simply by connecting to the "Rouge Wi-Fi" network onboard and following the instructions.

In addition to the full Air Canada Rouge fleet, satellite based Wi-Fi is already available on all Air Canada Boeing 777s, and most Boeing 787s and Airbus A330s with the remainder to be completed early 2020. Air Canada Wi-Fi connectivity is also available across the carrier's entire mainline narrow body fleet and the Air Canada Express Embraer 175 and Bombardier CRJ-900 fleets. Air Canada's new Airbus A220 fleet which it begins taking delivery of before the end of 2019 will come equipped with satellite based wi-fi.