MONTREAL, Aug. 28, 2019 /CNW Telbec/ - Air Canada announced today the introduction of year-round service between Montreal and Toulouse starting June 4, 2020. The five-times weekly flights will provide the only year-round service between the two cities and be operated with Air Canada's Airbus A330-300 fleet, featuring Signature Class, Premium Economy and Economy cabins. Special introductory fares from Montreal to Toulouse start as low as $729 CDN round-trip, all-in, and tickets are now available for purchase at aircanada.com or through travel agents. 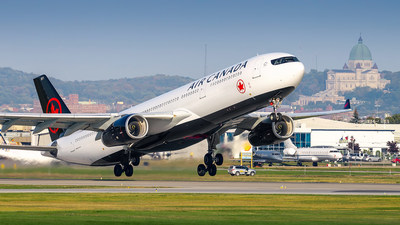 "Air Canada is very pleased to offer non-stop, year-round flights linking Montreal and Toulouse. This service will create opportunities to accelerate synergies between two of the world's leading aerospace industry hubs. Combined with our recently announced non-stop flights between Montreal and Seattle, the world's other major aerospace hub, starting next year, we are helping solidify Quebec's position as a global player in the aerospace industry, which will help maintain and encourage the growth of high-skilled, high-paying jobs in the sector. This further demonstrates the power of having a global champion in Montreal such as Air Canada; one with the capacity and network breadth to compete effectively in aviation, the most international of businesses," said Calin Rovinescu, President and Chief Executive Officer at Air Canada.

"This new route is our sixth destination in continental France and represents further growth from our Montreal hub, where Air Canada has launched 35 new global routes since 2012. Apart from its attractions as a business travel market, Toulouse is also known for its rich heritage spanning 2,000 years, abundant culture and its culinary scene. At the same time, as this route will be the only year-round service to south west France from Canada, it will strengthen Montreal's position as both a business and tourism destination while making it a premier North American Atlantic gateway, conveniently connecting customers to Air Canada's extensive North American network," Mr. Rovinescu concluded.

"The announcement of year-round service between Montreal and Toulouse is excellent news. Many economic sectors are bringing us closer to Toulouse, particularly aerospace, and we are convinced that this new Air Canada service will help strengthen or establish new collaborations between companies here and in Toulouse," said Robert Beaudry, head of economic development, housing and design on the City of Montreal's executive committee.

"We are very pleased that our major partner, Air Canada, is adding this new route to Toulouse, the aeronautical capital, and enhancing air service options departing from YUL. The Montréal-Toulouse link will offer direct access year-round to one of the world's largest economic and industrial centres which is also the headquarters of Airbus, our important partner at YMX, International Aerocity of Mirabel," said Philippe Rainville, President and Chief Executive Officer of Aéroports de Montréal.

"This new non-stop service will strengthen the aerospace cluster in Montreal and throughout Quebec by improving access and facilitating travel for the many aerospace companies doing business in the Toulouse area, home of the headquarters for Airbus, which also has major facilities in the Montreal area. In light of a recent report that points to challenges and opportunities in the aerospace sector, this new route by Air Canada comes at an ideal time to enhance our competitiveness," said Suzanne Benoît, President of Aéro Montreal.

Since 2012, Air Canada has launched 35 new routes from Montreal-Trudeau to global markets including Shanghai, Beijing, Tokyo, Tel Aviv, Lima, Sao Paulo, Casablanca. This growth has ranked Montreal among the 50 most internationally connected cities in the world. In 2018, Air Canada served more than 10 million passengers at Montreal-Trudeau.