MONTREAL, Aug. 7, 2019 /CNW Telbec/ - Air Canada was named Favorite Airline in North America in a survey of global millennial travellers at the 2019 The Trazees awards, an international award that recognizes the best in travel across a broad range of categories by the readers of the popular travel web publication, trazeetravel.com. 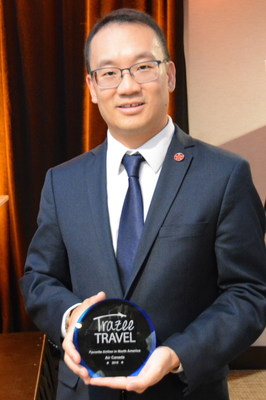 "We are honoured to receive this important recognition from millennial travelers around the world, the fastest growing travel demographic," said Andrew Yiu, Vice President of Product at Air Canada. "This award solidifies Air Canada as ahead of the curve when it comes to capturing this growing market and as a global leading carrier focused on a superior product offering and excellent customer service. It also complements our award of Best Airline in North America for a Third Straight Year at the recent 2019 Skytrax World Airline Awards."

At a ceremony for The Trazees in Chicago, Air Canada was presented the award. Trazee Travel is a web publication aimed at travellers aged 25–40 and part of the FXExpress Publications, Inc. family of publications, which includes Global Traveler and whereverfamily.com. Reader votes for the best in travel across a range of categories were collected December 2018–March 2019.

The Trazees is the latest award to be won by Air Canada, which was rated the Best Airline in North America at the 2019 Skytrax World Airline Awards and remains the only Skytrax Four Star international network carrier in North America. Other recent awards include: