MONTREAL, July 15, 2019 /CNW Telbec/ - Air Canada has won the inaugural award for Diversity in Leadership at the 2019 Airline Strategy Awards presented in London, England. The prize recognizes an airline organization that promotes diversity among its senior leadership team. 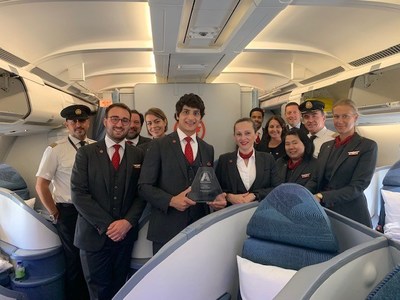 "We are very pleased to receive this award because Air Canada has made diversity a strategic focus and this has not only enriched our workplace but it has also become a competitive advantage for our company. One way we have done this is by encouraging diversity throughout the company, including in the leadership ranks. That a well-regarded, international organization such as the Airline Strategy Awards is recognizing our efforts is evidence that we are succeeding in building a truly diverse company," said Arielle Meloul-Wechsler, Senior Vice President, People, Culture and Communications.

This the first year The Airline Strategy Awards have presented the Diversity in Leadership Award. The winner was chosen based on achievement in areas such as increasing the diversity of a leadership team; promoting and advancing the careers of diverse leaders; and creating organizational conditions that contribute to attracting and retaining diverse leaders and professionals. Air Canada's award was accepted by Catherine Dyer, Senior Vice President and Chief Information Officer, at an award ceremony on July 14. This is the third consecutive year Air Canada has won an award from Airline Strategy, in 2018 Calin Rovinescu, President and Chief Executive Officer of Air Canada, won for Executive Leadership, and in 2017 Air Canada won for Finance.

Air Canada has been named one of Canada's Best Diversity Employers for four consecutive years. Its employees work in more than 80 languages, and women occupy prominent roles throughout the airline, from non-traditional roles to the C-suite.  For more information on diversity at Air Canada and its diversity programs please see Air Canada's 2018 Corporate Sustainability Report at www.aircanada.com.

The Airline Strategy Awards event is organised by Airline Business magazine in partnership with the civil aviation practice of Korn Ferry, the largest human-capital solutions provider in the world. Winners are selected by an independent panel of industry experts. Airline Business also presents its own award, recognising an individual making a lasting strategic contribution to the industry.