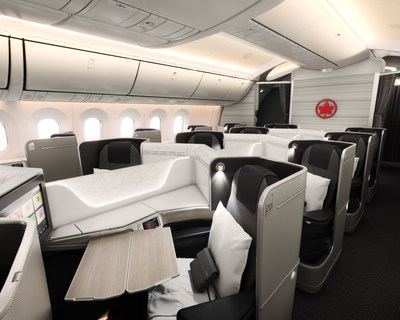 "We are very pleased that TripAdvisor's reviewers recognized Air Canada in its Travellers' Choice Airlines awards for Best Business Class in North America. We know our premium customers place a high value on convenience and comfort when in airports or onboard, and this award shows that our customers, whom we thank for their continued loyalty, appreciate the investments Air Canada is making," said Lucie Guillemette, Executive Vice President and Chief Commercial Officer at Air Canada.

"Congratulations to Air Canada for being named a Travellers' Choice Airlines winner this year. This prestigious award recognizes travellers' favourite airlines worldwide based on review data from our global community," said Bryan Saltzburg, president of TripAdvisor Flights, Cruise & Car. "This consumer accolade is a testament to outstanding service, world-renowned quality and amazing value. The Air Canada team should be proud of their award, as travellers around the globe have said this airline is among their preferred carriers when choosing to fly."

TripAdvisor, the world's largest travel site, enables travellers to unleash the full potential of every trip. With over 730 million reviews and opinions covering the world's largest selection of travel listings worldwide – covering approximately 8.1 million accommodations, airlines, experiences, and restaurants – TripAdvisor provides travellers with the wisdom of the crowds to help them decide where to stay, how to fly, what to do and where to eat. TripAdvisor also compares prices from more than 200 hotel booking sites so travellers can find the lowest price on the hotel that's right for them. TripAdvisor-branded sites are available in 49 markets, and are home to the world's largest travel community of 490 million average monthly unique visitors, all looking to get the most out of every trip. TripAdvisor: Know better. Book better. Go better.