MONTREAL, March 1, 2019 /CNW Telbec/ - Air Canada has been named one of Canada's Best Diversity Employers for the fourth consecutive year. In recognizing Air Canada, Mediacorp Canada Inc. cited the airline's ongoing work to foster inclusiveness through various partnerships, its success outreaching directly to diverse communities when recruiting and other initiatives. 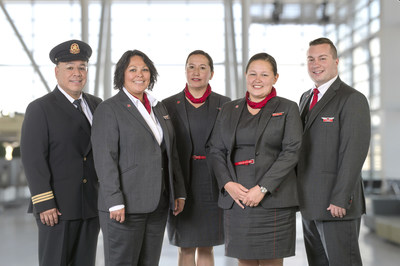 "We are very proud to be recognized for cultivating diversity and inclusion as these are important strengths for a global airline like Air Canada.  By having a diverse and inclusive workforce, we can attract and retain the best talent and our customers and stakeholders also see themselves and their cultures reflected in our 30,000 employees. Our people work in more than +80 languages, and women occupy prominent roles throughout our airline, from non-traditional roles to the C-suite," said Arielle Meloul-Wechsler, Senior Vice President, People, Culture and Communications at Air Canada.

"We continually nurture diversity and inclusivity by offering equal career opportunities to qualified members of all communities. The recruitment partnerships we have undertaken with First Nations, LGBTQ, people with disabilities, and other communities all aim to replenish our diverse talent base. This award is also welcome because it raises awareness that anyone qualified with the right skills and aptitude can be sure Air Canada is inclusive and welcoming."