Get news alerts by email
Bienvenido! Air Canada to Launch Service to Quito from Toronto

MONTREAL, Feb. 27, 2019 /CNW/ - Air Canada announced today it will launch new, non-stop service between Toronto and Quito. The new route, to be operated three-times weekly on a seasonal basis by Air Canada Rouge, will be the first non-stop service to Ecuador from Canada when it begins December 8, 2019, subject to obtaining the necessary government approvals. 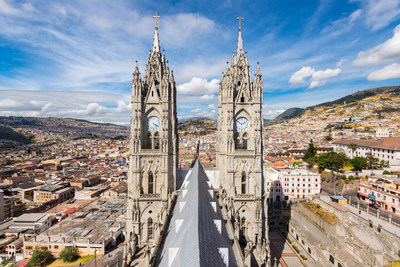 "Air Canada is expanding its footprint in South America as part of its ongoing international growth strategy from our Toronto global hub. As the capital of Ecuador, Quito is both an important tourism and cargo market, and Ecuador has a growing number of Canadians living in the country who will also benefit from this convenient non-stop service. As well, our expansion in South America gives us an opportunity to efficiently deploy our aircraft during the winter months when southern destinations are more popular," said Mark Galardo, Vice President, Network Planning, at Air Canada.

The Minister of Tourism of Ecuador, Rosi Prado de Holguín, remarked that the Ministry welcomes connectivity as fundamental to promoting the arrival of visitors to the country: "Connectivity allows tourists to fall in love of the 'country of the four worlds'. Also, our goal is to ensure tourism remains the third largest source of income for Ecuador, that's why we keep working every day to promote Ecuador in the world."

"Having Air Canada introducing a direct service between Toronto and Quito represents a major announcement. This new non-stop flight will act as a catalyst to strengthen existing ties between Ecuador and Canada by facilitating mobility for tourists and students; encouraging commercial exchange and opening new doors to further expand the breadth of our relations. Congratulations to Air Canada and to the Airport of Quito for this important success!"  said Sylvie Bédard, Designated Ambassador of Canada to Ecuador.

"Air Canada's decision to start operations between Toronto and Quito is very important as we are opening not only a new route, but a new market with a lot of potential. The Ecuadorian community in Toronto is significant and with the new flight we open the door so they are better connected to their home country. Quito is a tourist destination with great potential for Canadian travelers who are eager to explore different places and customs. In that sense, Ecuador has much to offer in cultural, historical, adventure and nature tourism, without forgetting of course its wonderful beaches and landscapes. The route to Toronto will also offer tourists from Ecuador the opportunity to get closer to Canada, a very welcoming country with unique attractions for Ecuadorians, thanks to the geographic and cultural contrast between both countries that, nonetheless, share a common characteristic: warmth towards visitors," said Andrew O'Brian, President and CEO, Corporación Quiport (Quito International Airport).

"In recent years, Quito has substantially improved its air connectivity with new routes and more frequencies to important destinations in the world. Having a direct flight between Quito and Toronto opens the doors to new opportunities with Canada, which is one of the most important and potential markets in the world. More tourism, more business, more connectivity and greater competitiveness. This is a great example of an excellent coordination and teamwork between the public and private sectors," said Álvaro Maldonado, Productive Development and Competiveness Secretary for Quito.

The new route will commence on December 8, 2019 and operate three return-trips weekly between Toronto and Quito until May 11, 2020. Flights will be operated by Air Canada Rouge using a 282-seat, Boeing 767-300ER aircraft offering two cabins and inflight entertainment streamed to personal devices. The flights will connect conveniently across Air Canada's network in North America and Europe. Customers can also collect and redeem Aeroplan Miles through Canada's leading loyalty program when travelling with Air Canada, and eligible customers have access to priority check-in, Maple Leaf Lounges, priority boarding and other benefits.

Special introductory fares start as low as $631 round-trip, all in, and tickets are now available for purchase at aircanada.com or through travel agents.