MONTREAL, Feb. 27, 2019 /CNW Telbec/ - Air Canada today announced new winter service from Montreal to São Paulo, Brazil, the only non-stop flights between the two cities. This new route to São Paulo will commence on December 11, 2019 and operate three return-trips weekly from Montreal until March 27, 2020. Flights are timed for convenient connections across Air Canada's network in North America, including to and from Vancouver, Calgary and Quebec City, as well as several Brazilian cities beyond São Paulo. 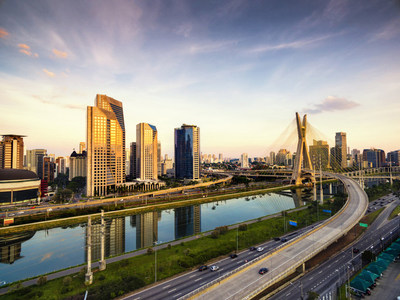 Special introductory fares start as low as $600 round-trip, all in, and tickets are now available for purchase at aircanada.com or through travel agents.

"Air Canada is continuing its international expansion from Montreal with the introduction of the only non-stop service between Montreal and Brazil. Complementing existing Toronto service, Montreal-São Paulo flights will provide a link to the country's largest city and financial centre while offering a great opportunity for Brazilians looking for a winter vacation in Quebec. São Paulo is the twelfth new international destination added by Air Canada from Montreal-Trudeau Airport since 2017, reinforcing further the commitment we have to develop Montreal as a strategic hub," said Mark Galardo, Vice President, Network planning at Air Canada.

"We are very pleased with Air Canada's decision to offer Montréal-Trudeau airport passengers a new link to a major economic and industrial hub," said Philippe Rainville, President and Chief Executive Officer of Aéroports de Montréal. "We have always wanted to significantly improve our service to South America. In addition to helping to provide more opportunities, especially for business travellers, this new connection to São Paulo further underscores YUL's role as a hub. This good news is in line with our vision of offering quality service to passengers in Greater Montréal in collaboration with our airline partners."

According to Gustavo Figueiredo, São Paulo airport's CEO, the route to Montreal serves a trendy market – Canada – with the highest growth rates outside South America. "We have been looking at expanding our Canadian network for the last two to three years and Air Canada is the ideal airline: leading brand in Canada, large connectivity beyond Montreal and a strong Brazilian presence. We have no doubt that the route will be successful, combining Air Canada's hub in Montreal with our unrivalled connectivity within Brazil and low region of South America – Argentina, Uruguay, Paraguay and Chile. The Montreal market has a good mix of corporate traffic with IATA, ACI and ICAO having their main offices there – and leisure demand."

"This new non-stop flight, the first between Montreal and Brazil, confirms once again Montreal's international hub status. Brazil's economy ranks 8th in the world and represents a promising and strategic market for our companies from the life sciences and aerospace sectors, among others. The Chamber of Commerce of Metropolitan Montreal congratulates Air Canada for its leadership and commitment to increasing the number of direct flights from Montreal," said Michel Leblanc, President and CEO Chamber of Commerce of Metropolitan Montreal.

"As Brazil recorded a 38% increase of travellers to Québec in 2017, the Alliance welcomes the launch of a new Montréal‒São-Paulo non-stop flight. This initiative supports the current efforts to position Québec as a travel destination to markets in South America, while reflecting positively on our industry's seasonality. Brazilian visitors are particularly fond of our winters, our wide-open spaces and our local flavours. The Alliance acknowledges Air Canada's commitment in launching this direct international non-stop flight to Québec. Accessibility is a determining factor when pursuing vigorous growth on the international visitor market ‒ in turn, it generates major economic spin-offs for the entire destination," stated Martin Soucy, Chief Executive Officer of l'Alliance de l'industrie touristique du Québec.

This new service is one of three new routes announced today by Air Canada. In addition, new seasonal services were also announced between Toronto-Quito and Vancouver-Auckland. For more details please see aircanada.com/media.

Air Canada, Air Canada Rouge and its regional airline partners flying under the Air Canada Express banner operate on average approximately 2,400 flights per week between Montreal and 99 destinations: 26 in Canada, including 9 in Quebec, 24 in the United States, 25 in the Caribbean, Central America and Mexico, 17 in Europe, two in Asia, two in North Africa, one in the Middle East and two in South America.