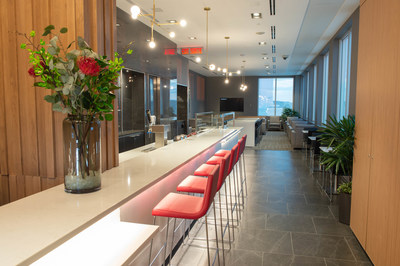 "We are excited to welcome Air Canada and Star Alliance eligible customers to our new Maple Leaf Lounge at Skyxe, which has been created to enhance the overall travel experience for our premium customers," said Andrew Yiu, Vice President, Product at Air Canada. "Showcasing contemporary Canadian design and artwork, and drawing on the pastoral landscape of Saskatchewan, the lounge is decorated with maple wood screen walls, Canadian-made furnishings and Canadian materials. Customers will be warmly received and enjoy a calm environment in which to work or relax before an Air Canada or Air Canada Express flight."

"The award winning Skyxe continues to modernize and welcome the world to our city. The trusted brand of the Maple Leaf Lounge is a fantastic addition to what we offer here in our growing prairie community. Thank you to Air Canada for your commitment to Saskatoon," said Saskatoon Mayor Charlie Clark.

"As one of Canada's fastest growing metropolitan centers, the opening of an Air Canada Maple Leaf lounge in Saskatoon speaks to the continued interest to invest in our city and confirms Saskatoon as a top destination in Canada," said Darla Lindbjerg, CEO of the Greater Saskatoon Chamber of Commerce.

"With a sharp increase in arrivals into Saskatoon and strong projections for National and International travel, having a Maple Leaf Lounge at our award-winning John G. Diefenbaker International Airport is very exciting. Being able to offer visitors who are eligible customers an added amenity, will only add to their positive experience in Saskatoon," said Todd Brandt, President and CEO of Tourism Saskatoon.

The 137-square-metre lounge features such amenities as a full-service bar offering a wide selection of beverages, including Canadian wines and specialty coffees, a self-serve buffet area and comfortable seating with a view of the tarmac. Business travellers planning to work on site may also take advantage of the cyber counter equipped with PCs and colour printing, complimentary Wi-Fi and access to a large variety of digital newspaper and magazine content via the PressReader app.

The Skyxe Maple Leaf Lounge will operate seven days a week, and is conveniently located in the departure gate area, steps away from Air Canada's departure gates.

Air Canada and its regional partners operate over 110 weekly (17 daily) non-stop scheduled flights this summer from Saskatoon to seven destinations across Canada. It offers up to 1,320 seats departing the city, with up to six daily non-stop flights to Toronto, four to Calgary, three to Vancouver, two to Winnipeg, one to Edmonton, one to Regina and one from Ottawa.

About Air Canada
Air Canada is Canada's largest domestic and international airline serving more than 220 airports on six continents. Canada's flag carrier is among the 20 largest airlines in the world and in 2017 served more than 48 million customers. Air Canada provides scheduled passenger service directly to 64 airports in Canada, 59 in the United States and 98 in Europe, the Middle East, Africa, Asia, Australia, the Caribbean, Mexico, Central America and South America. Air Canada is a founding member of Star Alliance, the world's most comprehensive air transportation network serving 1,317 airports in 193 countries. Air Canada is the only international network carrier in North America to receive a Four-Star ranking according to independent U.K. research firm Skytrax, which also named Air Canada the 2018 Best Airline in North America. Air Canada was also named the 2018 Eco-Airline of the Year by the respected airline industry publication Air Transport World in its 44th Annual Airline Industry Achievement Awards for its commitment to emissions reductions through supporting the development of alternative fuels, its numerous green programs and partnerships, and being the first airline worldwide to voluntarily join the World Bank's IMF Carbon Pricing Leadership Coalition. For more information, please visit: www.aircanada.com/media, follow @AirCanada on Twitter and join Air Canada on Facebook.