MONTREAL, June 20, 2017 /CNW Telbec/ - Air Canada was today named Best Airline in North America by the 2017 Skytrax World Airline Awards at the International Paris Air Show. It is the sixth time in eight years Canada's flag carrier has been named the continent's best airline by Skytrax, whose survey of almost 20 million air travellers is recognized as the global benchmark of industry excellence. 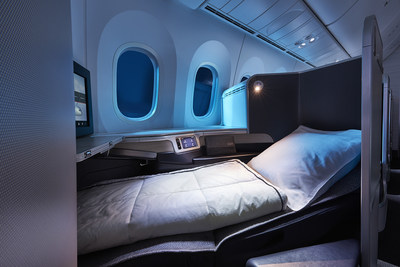 "We are delighted to be recognized as the Best Airline in North America by Skytrax based on the opinions of those who know us best: our customers. This award is a significant milestone in the transformation of Air Canada into one of the world's leading carriers and is all the more meaningful given the increased competition in our industry," said Calin Rovinescu, President and Chief Executive of Air Canada.

"I thank our employees for their hard work and dedication in helping us earn this distinction and I thank our customers for their loyalty and support as we have expanded our reach across the globe. As we celebrate our 80th year in 2017, we are extremely proud to be Canada's flag carrier, North America's Best Airline and its only Four Star network carrier," added Mr. Rovinescu.

Benjamin Smith, President, Passenger Airlines at Air Canada, said: "This award, based on the opinions of almost 20 million air travellers worldwide, shows customers are enthusiastically embracing the significant investments Air Canada is making in its products and services. These include the introduction of the state-of-the-art Boeing 787 Dreamliner into our fleet, a widening choice of destinations to choose from in our expanding global network, refurbished aircraft interiors featuring our next generation lie flat Business Class seats on all of our Boeing 777 and 787 aircraft and dedicated Premium Economy cabins, as well as other enhanced amenities ranging from sharply restyled Maple Leaf Lounges to signature dishes and wine pairings onboard."

"We are delighted to welcome Air Canada back at the World Airline Awards to recognize their achievement of being named the Best Airline in North America. To receive this accolade six times, in the last eight years is a remarkable achievement and we congratulate the airline on this outstanding, consistent performance," said Edward Plaisted, Chief Executive of Skytrax.

Since 2010, Air Canada has embarked on a $10 Billion capital expenditure program to elevate the travel experience. Customer-focused initiatives have included:

The 2017 edition of the annual Skytrax poll measured opinion from 19.87 million travellers drawn from over 105 countries worldwide between August 2016 and May 2017. The survey covers over 325 airlines, from largest international airlines to smaller domestic carriers, and evaluates quality standards across 41 key performance indicators in front-line products and services in the airport and onboard environments.

Air Canada is Canada's largest domestic and international airline serving more than 200 airports on six continents. Canada's flag carrier is among the 20 largest airlines in the world and in 2016 served close to 45 million customers. Air Canada provides scheduled passenger service directly to 64 airports in Canada, 57 in the United States and 95 in Europe, the Middle East, Africa, Asia, Australia, the Caribbean, Mexico, Central America and South America. Air Canada is a founding member of Star Alliance, the world's most comprehensive air transportation network serving 1,300 airports in 191 countries. Air Canada is the only international network carrier in North America to receive a Four-Star ranking according to independent U.K. research firm Skytrax. For more information, please visit: www.aircanada.com, follow @AirCanada on Twitter and join Air Canada on Facebook.